Kyrie Irving was ousted in the second round to the Milwaukee Bucks in the 2019 post season. There were many outlets that deemed him a failure because of this and questioned his leadership.

Here in this post, I will discuss my interpretation of where and how he failed.

The video below is an ESPN First take discussion on Kyrie’s failed leadership.

There have been outside reports of Kyrie being moody and not talking to his teammates. There have been some questions about his leadership styles in his mannerisms throughout the season and postseason. NBA analyst Richard Jefferson at one point in time did say there were times when he wasn’t communicating With the rest of the team and people attempted to reach out to him and there was no response.

This could have been a contributing factor to why Kyrie Irving’s leadership failed.

There are other factors as well. These are, but aren’t limited to:

1. Kyrie isn’t fully developed as a floor general and doesn’t get enough assists for his team.

2. Kyrie is a ball dominant point guard is an offensive system that promotes and needs to promote sharing the ball.

4. Or, Kyrie attempted a leadership style that doesn’t fit this cast of characters.

5. Also, Kyrie could have one foot out the door and that could contribute.

6. There’s lastly the idea that Kyrie is facing the demons of his own self.

By this  I mean Kyrie is coming full circle with the reality he thought he couldn’t defeat. What is this you say?

The shadow of LeBron James.

Judging from Kyrie’s time with LeBron James and prior to the King’s return to The Land, Kyrie Irving has always had an ego. Granted at 22, being a 2 time All Star and All-Star Game MVP I’d be smelling myself too. ESPN’s Stephen A Smith once reported that LeBron told Kyrie he might come back and Kyrie told his teammates that they didn’t need him…

Kyrie and LeBron often clashed about how to orchestrate the offense and LeBron tried to teach Kyrie a lot. And he definitely did. But Kyrie wanted his own legacy. This was revealed when he asked out of Cleveland in 2017.

Kyrie didn’t like Lebron’s shadow. Thought he was great on his own and wanted to prove that apparently. This hasn’t come out of Kyrie’s mouth however it’s evident in a lot of his interviews and reports.

Fast forward to today this current season appeared to be a reflection of how Kyrie acted in Cleveland. Young, and wanting his own platform. There were often reports in the League that the young players Jayson Tatum, Jaylen Brown, Terry Rozier wanted their own platforms and believed they could win without Kyrie. They had seen their touches dwindle because of the return of the superstar point guard after they had led their team to a game away from a finals berth. 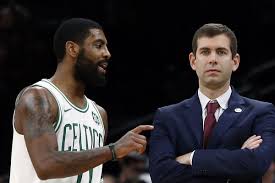 The Boston Celtics season felt like a Cavs season (with Lebron). Countless drama and petty passive aggression from Kyrie about his teammates trying to motivate them and keep them on the same page. It seemed like players had their own agendas and it was even harder when players knew Kyrie wasn’t fully committed to the team because of his impending free agency. Kyrie would often call out his teammates publicly in interviews and send shots indirectly towards them.

This is all a mirror of Kyrie’s actions towards LeBron. The young stud. Challenging the proven veteran and superstar, the Celtics young core challenged Kyrie but privately. And it was evident in their play. Jayson Tatum disappeared against Milwaukee. Terry Rozier went on various ESPN shows and expressed his dismay for his playing time and role.

All of this felt too familiar.

What does it show?

It reveals to Kyrie that he still has to grow.

Above is a video of Irving revealing he apologies to Lebron James.

He’s not ready for the Leadership role and needs to learn from this experience and grow from it. We all make mistakes, We’re all human. Kyrie isn’t exempt from this just because he’s a celebrity. Luckily for him, he gets to reinvent himself in a new location as he is about to become a free agent.

Hopefully, Kyrie can make the changes necessary to become a better leader. Hopefully, he can return to Boston and Prove it there. On July 1st, we’ll learn what Kyrie does.